Heartbroken Jamie Denyer, went on a mission after his nephew was killed by a single punch

The devastated uncle of a teenager killed by a single punch has told of his heartbreak at losing his nephew.

Connor Saunders – a pal of X Factor star Frankie Cocozza – died on April 14, 2012, when he was struck after getting into an argument with a group of teenagers.

Now Jamie Denyer, from Swansea, has revealed how his family’s lives were changed forever by the 19-year-old’s death.

Jamie’s memories of the day are still clear…
“I got a call from my sister at half one in the morning saying ‘You have got to come to Brighton,’ which is where I’m from,” the dad of three said.

“She said I had to get in the car because [Connor] had been attacked.

“I thought he had been just beaten up but was in the best place.” 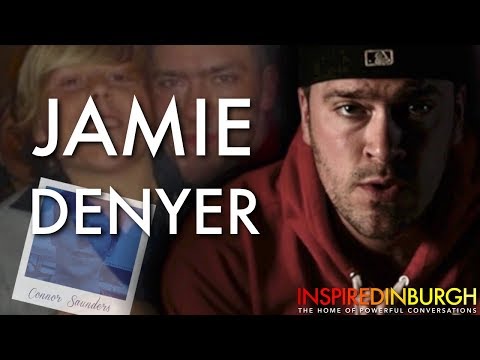 This week on Inspired Edinburgh we have Jamie Denyer.

Jamie, also known as The Grief Preacher, is a TEDx, motivational, and inspirational speaker.

On 14th April 2012, at the age of 19, his beloved nephew Connor Saunders lost his life to a single punch. Jamie since founded ‘JamieDenyer.com’, an organisation through which he delivers workshops and talks at schools, universities, business exhibitions, networking events, young offender institutions and prisons, raising awareness of one punch murder in order educate others on the devastation it brings, and to prevent it from affecting as many families as possible.

In this inspiring interview, I talk to Jamie Denyer “The Grief Preacher”. Jamie is a Motivational Speaker and Workshop Facilitator who speaks in companies, football clubs, schools, prisons and more.

After the tragic loss of his nephew, Jamie embarked on a mission to keep the memory of his nephew alive and use his death as a lesson and message to others.

In this interview, you will learn:
-The power of kindness
-How to survive adversity
-How to stay grounded
-The power of making promises
-Why you must find forgiveness

Life threw Grief Preacher Jamie Denyer a ‘curve ball’ when his teenage nephew Connor was murdered. It took a massive amount of effort for Jamie to recover from that shock and now he helps others to overcome their issues and look towards the future.

Jamie has told Dr Bridget Kirsop in an inspirational and in-depth interview that helping others: “Has given me a real purpose and a mission to make a change.”

Jamie, originally from London but now living in Gorseinon, works as an inspirational and motivational speaker now and was given the tag of Grief Preacher when speaking to inmates within Parc Prison, Bridgend.

Jamie Denyer took a very sad adversity event and has turned it to help and save others. what jamie does is uber inspirational . Don’t believe me well listen an amazing person . thanks for being on the show Jamie

The workshops aimed to promote positive thoughts and behaviour while encouraging young people to think about the consequences of their actions. One, entitled One Punch Can Kill, focused on the tragic death of Jamie’s 19-year old nephew.

Thanks to backing from the Innovation Fund, the workshops were set up for selected students across the college to examine motivation and positive character building techniques.

GOT A QUESTION OR INTERESTED IN BOOKING JAMIE TO SPEAK?